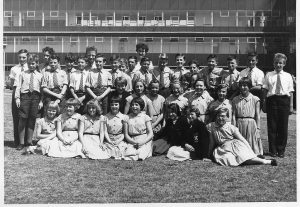 Great Barr Comp was, until 2009, the largest single-site comprehensive school in the country with over 2,400 pupils on roll. We spoke with John Slatford, a pupil at the Comp (now an academy) in its early days, and here he shares his memories. His time there helped him forge an exciting science-based career that took him all over the world so, now aged 74 and still living locally, he recalls why it was ‘such a great school’.

“My first knowledge of the existence of Great Barr Comprehensive School was in 1957. I’d passed part one of the 11-plus at my junior school in Turfpits Lane. That brought with it a choice for my Secondary education.

“I dismissed the idea of Grammar school with what I considered its narrow arts-based curriculum as my interest was the sciences. Luckily a teacher at my junior school was aware of a ‘new type of school’ that had just been built locally. He thought it would be ‘ideal for me’

“So I sat and passed part two of the 11-plus at Great Barr Comp itself – a school which was otherwise just outside my ‘catchment area’. Prior to sitting the exam, we were given a tour of the school which was mind-blowing as I’d never seen anything like it before!

“I started in September 1958 in class 1.2 with Pat Tullet as my Form Teacher. All the pupils were assigned a House. Mine was Priestly. The other Houses were Boulton, Fry and Nightingale. The curriculum was varied, and for the first time I had to listen to the teacher and write down what she said or copy it from the blackboard.

“Once I moved to the second year we were put in a form and a ‘set’ for various subjects. Internal exams in all subjects were taken three times a year. This meant every pupil had a bespoke timetable of lessons depending on ability. My interest was science which was so well catered for – eleven specialist laboratories!

“Very special about the school was the after-school activities.  I joined the Photographic Club, Film Club, History Society, Rambling Club and Visual Aids Society. This meant staying on at school until about 9:30 every evening. We were allowed two hours to do our homework in one of the science laboratories, which suited me. I was also in the Cross Country Running Team and ran for the school at weekends. Luckily there was a disused quarry across the road from the Comp used for cross country running practice. The Rambling Club took place each month on a Sunday and we were only allowed to ramble if we had the proper equipment.

“As one of three pupils recruited for the Visual Aids Society I was taught how to use and maintain the school’s projectors and to show films to the various clubs. We had an active Drama Department and we’d put on Gilbert and Sullivan Operas – giving me a lifelong love of their music and comedy.

“During the six-week holiday a group of boys would be taken Youth Hostelling in Britain and Switzerland. I was lucky enough to go on holidays to the Lake District, Devon and Cornwall.

“Two of the pupils at Great Barr Comp during my time are now world famous. Steve Winwood the musician and Martin Shaw the actor. All in all, it was a fantastic school. I hope today’s pupils appreciate what it offers and that it is still as good as when I was a pupil, back in the 1950s.”

** Great Barr Academy say they will be ‘welcoming students to its brand-new 6th Form Centre in September’.

Read the article in our online edition of Great Barr Gazette here.

You do a wonderful job. I wouldn’t be without the Pioneer Magazine.